~ Take time for yourself...Take time to be quiet. Come, get away from it all. ~ 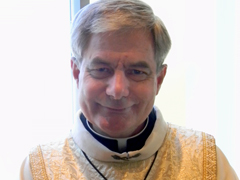 Fr. Lon is originally from Minnesota and calls Minneapolis his home town. Upon Ordination, Fr. Lon served for 13 years in Scandinavia, and was one of the founders of the Oblate mission in Norway. Having returned to the United States in November of 1990, Fr. Lon helped organize the Oblate Preaching Team to conduct Parish Renewals (missions). After 156 parish renewal missions, he was assigned to the preaching staff at Immaculata Retreat House in Willimantic, CT from 2000-2008. He joined the staff at Christ the King Retreat Center in July, 2008.